Allahrakha, a Peacemaker in Pakistan 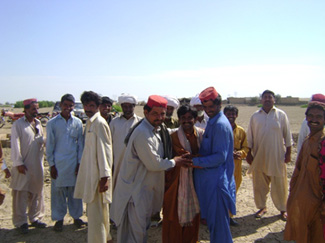 Allahrakha served as a local peacemaker working with World Relief Germany (formerly PartnerAid) in Pakistan. He helped bring together different tribal groups so they can work together on development projects.

Allahrakha was overseeing restoration projects after a damaging flood in 2010 when he noticed two tribal groups under his supervision were caught in a serious conflict. The two groups did not support intermarriage between two individuals from their respective regions. This led to honor killings in both tribes, worsening the tensions that already existed between them.

Allahrakha saw that the conflict was hurting both relationships within the community and delaying important development projects – projects that could not be completed unless the tribes worked together. He used his knowledge of local culture and his understanding of peace making to bring the groups together and lead them to reconciliation. Only after this process were the groups able to resume their work rebuilding their community together.

“Blessed are the peacemakers, for they will be called the children of God.” Matthew 5:9 Peacemaking is a Biblically-based, long-term strategy for preventing and addressing man made conflict. It directly addresses the tensions woven into the fabric of societies that often lead to conflict and violence.