As the tall maize grows in her fenced-in yard in South Sudan, Rebecca prepares cornmeal while her elderly mother and four youngest children play alongside.  Thankful for this harvest and the food it provides her large family, she contemplates what the next few months might bring, especially in light of the major food crisis in her country. 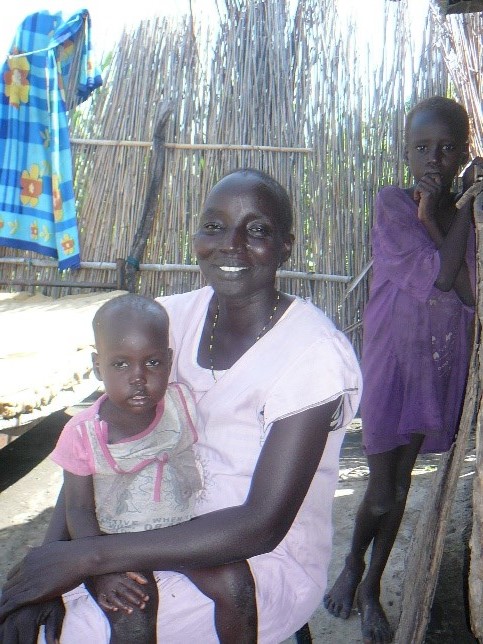 Rebecca is a farmer, trained by World Relief’s agricultural experts in crop diversification and resource management.  Proudly pointing to her crops, she explains that because the rains had been good, she expects a better crop than last year.  But this came at a hard price.  In January, Rebecca had seven cows, but the fighting from the country’s civil war closed off the markets, and the food supply was low from last season’s drought.  She’d sold a cow to get bags of maize as starter seeds, but as the months of fighting went on, more was needed.  As a widow and sole breadwinner for her family of 9, she had to risk the 16-hour walk once a month to trade a cow for food to feed her family.  February, March, April, May, and June dragged by and before she knew it, she had only one cow left.  Rebecca hoped her harvest would come quickly.

“And then the raindrops started,” Rebecca said.  The rains that nourished the crops would guarantee a good late-summer harvest.  At the same time, World Relief distributed a corn and soy bean blend to the most vulnerable in the area and will continue this monthly for the rest of the year to avert the predicted famine.

This harvest and the food supplies should feed Rebecca’s family until January 2015.  In a continued effort to fight the food shortage, World Relief will also distribute vegetable seeds (groundnuts, eggplant, sesame, tomatoes), which will provide a nutritional supplement and be an income generator during the winter months.  But with ongoing fighting and what the UN describes as the ‘worst food crisis in the world’, significant challenges remain for Rebecca, her family and millions of others in South Sudan.  Even though Rebecca isn’t sure what the outcome will be, her faith gives her hope, “Everything is in God’s hands,” she says.

That’s why World Relief stands with the people of South Sudan as we celebrate World Food Day and continue to empower many to fight famine on the frontlines.