Sarith is a farmer living in a small house in Cambodia. He became an actor when he was young and traveled all around Cambodia for performances. While he traveled, he engaged in risky behaviors and did not understand the consequences of his actions.
In 1997, Sarith got married and had two children. He continued to travel frequently as part of his drama group, but his absence from home resulted in a broken marriage. 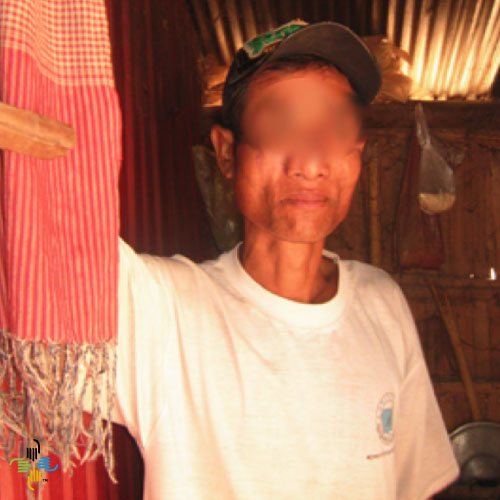 As Sarith spoke about this time in his life, he held back tears. He said he carries much sadness and regret about his broken family.

Sarith remarried in 2005 and had a daughter with his new wife. His daughter passed away of disease. Soon after, Sarith also became sick. He sold his property to get medical treatment. To subdue his fear of death, he engaged in traditional practices such as Khmer magic, water sprinkling and dark magic. Whenever he heard of a new possible cure, he would spend his money hoping to be healed. Still, nothing worked.

Sarith learned about HIV/AIDS from World Relief. World Relief volunteers encouraged Sarith to get tested for HIV/AIDS and connected him to a support group. Initially Sarith was resistant, but he finally decided to be tested for HIV/AIDS. The test confirmed what Sarith feared – he was HIV positive. When he learned of his diagnosis, he felt hopeless. He said he wanted to die. But the support group he belonged to continued to encourage and assist him. Slowly, his attitude changed and he realized that he wanted to live.

Sarith still faced persecution by his parents, relatives and neighbors. But as volunteers from the support mobilized and educated the village about HIV/AIDS, including its real causes and how to prevent it from spreading, the community understood and stopped discrimination against Sarith and his family.

As Sarith received assistance from a local cell church, planted and mobilized by World Relief, he and his wife were introduced to the Gospel and became Christians. Today, they are members of a local support group and cell church. Sarith serves his community and shares with his neighbors what he has learned, not only about health, but about Christ’s love.