I Survived the Vietnam War to Become a Proud American

I was born in Southern Vietnam in 1953. I grew up just like any other boy in my country and had a happy childhood.

Then news about war in Vietnam gradually appeared on the front pages of newspapers in the 1960’s, and things began to change

Like many young men in wartime, I reported for military service in South Vietnam at just 18 years of age. I learned we’d be fighting alongside our American allies, which filled many of us with hope. Little did we know, however, that the war in Vietnam would carry on for 19 years and four months. It finally ended in April of 1975, and I was sent to prison for a year for fighting on the South Vietnam side. Afterward, I was told to relocate to a wild area of the jungle called the “New Economic Zone.” Instead, I went to my mother’s hometown in the countryside and made my living as a farmer.

As a former South Vietnamese soldier, I knew I couldn’t stay in the country. My children would not be allowed to pass high school education. They would be barred from being successful people in society. But escape was difficult, very difficult. People who were caught trying to escape would serve long prison terms. After several failed attempts at escaping by myself, I paid a local fisherman to smuggle me out in his boat. Two days after we left, the boat’s engine failed, and a navy ship from Malaysia rescued us.

I finally entered America for the first time in August of 1989 and was welcomed by volunteers from a local church community. They gave me a room to live in and assisted me in acclimating to life in a strange new country.

At first, I was intimidated. Life was fast-paced, and there was a lot to get used to. For instance, coming from a tropical country, I was terrified of the cold. I didn’t have a TV so I never knew the weather report for the day. I would stick my hand out the window in the morning to see what it felt like so I knew what to wear. When winter came, I made the mistake of washing my winter coat and then hanging it outdoors to dry. When I brought it in at the end of the day, it had frozen to ice.

I was also mistrustful of Christians when I first arrived in America. To my knowledge, the Vietnamese kings did not like Christianity when it first spread to Vietnam. In the late 19th century, the French army came to “protect” new Vietnamese Christians from persecution, which eventually led to the French colonization of my country, and that lasted for almost a hundred years. Growing up a Buddhist, I was naturally suspicious of Christians.

But then I came to America, and people who didn’t share my religion or language – people who had nothing in common with me – went out of their way to help me.

They helped me simply because they cared about me, a stranger, and that caused something to change in me. I wanted to know what this religion was that inspired people to care for me like that so I began attending church. Eventually I, too, became a Christian.

Today, I am a leader in my church. I am also a father and grandfather. My son became a U.S. Marine and is now a junior pastor. I work as a social worker for World Relief, helping other refugees adjust to life in the U.S. I feel blessed to be able to do this work. I understand that many refugees have survived harrowing ordeals and are skeptical of receiving help at first. I use my experience to help them regain their trust in people. I love the work I do.

My brother and sister also became U.S. citizens, but my 94-year-old mother still lives in Vietnam. In 30 years, I have only been able to visit her there four times. My heart aches from missing my mother, but I still don’t feel safe going back there.

When I was in prison in Vietnam, defeated and suffering, I never imagined I could have this kind of life. I want Americans to know how truly blessed they are. Here, we pursue the ideals of freedom and equality. In this country, the poor and the rich shop side-by-side at Walmart. No one is above the law. If people disagree with the government, they can voice their opinions and not be afraid of retaliation.

This is the United States I love and am proud to belong to. I appreciate the opportunity to live in freedom. I hope that by coming together, embracing the American ideals of freedom and equality, and shouldering our societal responsibilities, we can assure the American public refugees and other immigrants are worth welcoming.

Some people say what I endured as a young man, and my experience as a refugee, is remarkable. But I disagree. Living in this country – a country where people are willing to step forward and help strangers simply because it is good and right – that is the remarkable thing. 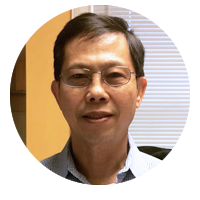 Chau Ly is a former refugee and social worker at World Relief.