The local Church is the best hope for transformation in Mozambique, where communities face deep spiritual and physical poverty. Life expectancy is 52.29 years because of the prevalence of diseases like HIV/AIDS, malaria and tuberculosis. 52 percent of the population lives on less than $2 per day. Environmental stressors like droughts and floods exacerbate these problems. After years of colonialism, war and socialism, the local Church in Mozambique is weak. Many church leaders lack training, sometimes combining Christianity with the worship of ancestors and other spirits. Pastors often share false information about diseases and extort congregation members, demanding payment in exchange for healing and forgiveness.

In Mozambique, World Relief seeks to restore the role of the local Church. Ten staff members are leading Spiritual Transformation groups in ten different villages, each group discipling 10-15 people, many of whom are local church leaders, once a week for three years. Scripture is taught through a pictorial Bible curriculum, as 54.9 percent of the population is illiterate. Currently, a total of 425 participants are being reached, but those who have “graduated” from the discipleship groups are also going on to form their own groups. The results are transformed families, congregations and communities. 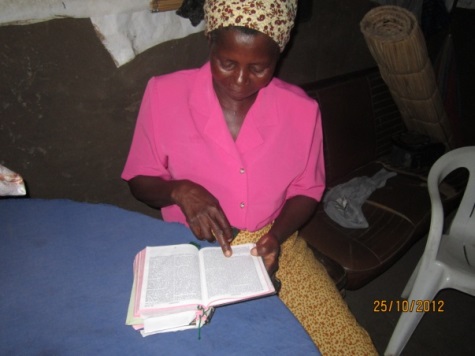 Mrs. Cristina, a widow and 53 years of age, used to make a profit by preaching in her denomination, offering congregation members a distorted gospel that required sacrifices in exchange for healing. She and the other church leaders maintained an illusion about the cause of sickness and repayment for sins that led to their financial gain rather than spiritual transformation.

Through a discipleship group, Mrs. Cristina and the other church leaders realized they could not go on exploiting the congregation. They acknowledged that it is only by the blood of Christ and not by meaningless sacrifices of their own that people are saved. For Mrs. Cristina, accepting this truth meant she must take a huge risk. She was going against the beliefs of her denomination and finding a new source of income.

Now, this church is one of many positioned to be an agent of change in its community as the congregation is mobilized to meet the needs of the vulnerable, prevent poverty and address problems like disease and exploitation. This is a true example of how World Relief’s call to empower the local Church is vital for effectively serving the most vulnerable around the world.

Find out how you can get involved with the work of World Relief.