As Refugee-Related Executive Order Makes Its Way Through the Courts, Top Evangelicals Speak Up via Full-Page Ad in Today’s Washington Post

WASHINGTON, DC —
More than 500 evangelical pastors and ministry leaders representing every state in the nation, signed on to a letter to President Trump and Vice-President Pence, expressing concerns over the dramatic reduction in refugee resettlement included within a presidential executive order. The letter is being delivered as the 9th Circuit Court of Appeals sustained a federal judge’s temporary restraining order on some, but not all, elements of that order.

The letter, published this morning as a full page ad in The Washington Post, was affirmed by many of the most prominent evangelical leaders in the country including authors Tim and Kathy Keller, Senior Pastor Bill Hybels and author Lynne Hybels, and Northland Church Senior Pastor Joel Hunter.

“We live in a dangerous world and affirm the crucial role of government in protecting us from harm and in setting the terms on refugee admissions. However, compassion and security can coexist, as they have for decades,” states the letter. “While we are eager to welcome persecuted Christians, we also welcome vulnerable Muslims and people of other faiths or no faith at all. This executive order dramatically reduces the overall number of refugees allowed this year, robbing families of hope and a future.”

The letter notes how thousands of local U.S. congregations have welcomed newly arrived refugees of all faiths through the Refugee Resettlement Program and how these churches and other ministries still have the desire to welcome many more. “As Christians, we have a historic call expressed over two thousand years, to serve the suffering. We cannot abandon this call now,” the letter continues.

The letter was coordinated by World Relief, a global Christian humanitarian organization that serves vulnerable people worldwide through a variety of holistic development initiatives. Additionally, World Relief is one of nine agencies nationally authorized by the U.S. State Department to resettle refugees.

“It is not new for the church to use its voice on behalf of those who have none. It is part of our historic call and identity. And for nearly four decades World Relief has helped thousands of churches and tens of thousands of volunteers express that call by welcoming refugees. This letter is evidence that the church will not abandon its calling to serve the most vulnerable,” said World Relief President Scott Arbeiter.

“Christians have always spoken up for the vulnerable. I hope the Trump administration hears our concerns that we have a safe and compassionate refugee policy—and our confidence that we can continue to do both,” noted Ed Stetzer of Wheaton College.

“For some people, embracing refugees is a political issue,” noted author Lynne Hybels. “For me, as a Christian, speaking up for and caring for refugees is more an act of worship and obedience to a God whose Kingdom is global and whose ‘mercies are new every morning.’ On a personal level, my life has been profoundly enriched by the courageously resilient refugees I’ve known in Jordan, Lebanon, Iraq, and the Democratic Republic of Congo, as well as in Illinois and Michigan. I hope many more American Christians will be able to enjoy the rewards of such mutually transformational relationships.”

“While politicians debate and courts deliberate, we are Christians who pray for refugees,” said Leith Anderson, president of the National Association of Evangelicals. 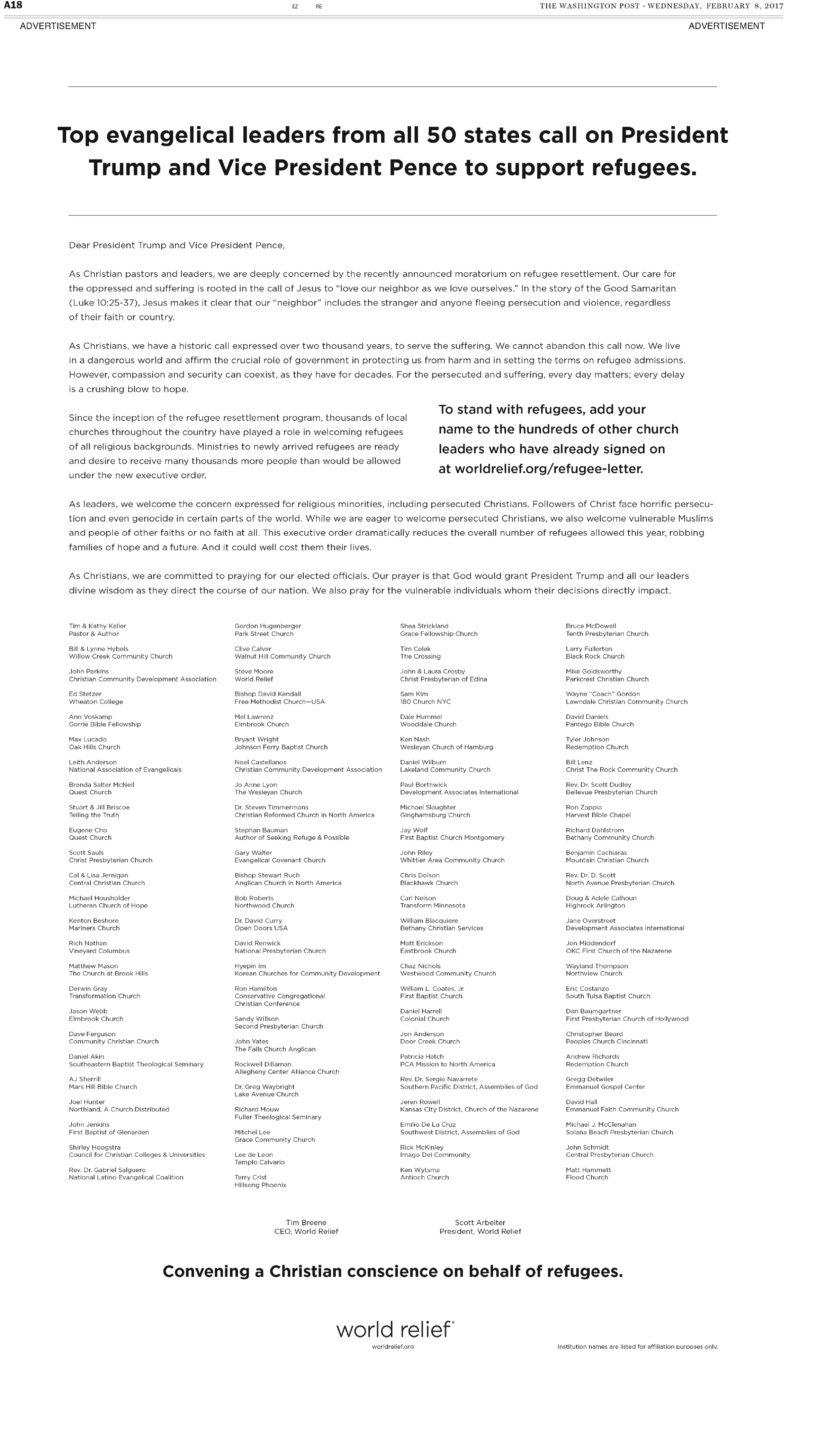 World Relief is a global humanitarian relief and development organization that stands with the vulnerable and partners with local churches to end the cycle of suffering, transform lives and build sustainable communities. With over 70 years of experience, World Relief has 25 offices in the United States that specialize in refugee and immigration services, and works in 20 countries worldwide through disaster response, health and child development, economic development and peacebuilding.