By Lynne Hybels
It started out as an ordinary day for Cecile, a married mother of five children. With her family relying on farming for their livelihood, Cecile decided to get a head start by walking to the fields early that morning. As she approached the field, however, she was stopped and threatened by eight armed men. Alone and helpless, Cecile began to cry, but this didn’t discourage her attackers. She was raped by five of the men before she lost consciousness and was left to die.

In the Eastern region of the Democratic Republic of Congo (DR Congo), eight out of ten women have been raped. Like Cecile, they are victims of a civil war that has become the deadliest war since WWII. Over five million people have been killed. Millions more have been displaced from their homes, their farms and their livelihoods. And brutal rape is used as a weapon of war by fighters who say it’s cheaper to rape a woman than to waste a bullet; if you rape enough women you can destroy the soul of a whole village, a region, even a country. Some experts call the DR Congo the worst place on earth to be a woman. 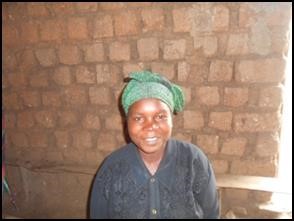 Cecile, a woman from DR Congo

I first heard about this conflict on an NPR news report in 2008. Shocked and heartbroken, I searched for an organization responding to this horrific suffering with compassion and wisdom; my search lead me to World Relief. Twice since then I’ve traveled to Eastern Congo with World Relief to meet with women like Cecile. On a single day two years ago I sat in a simple church sanctuary in the town of Rutshuru and listened to eleven women — ages 8 through 58 — tell their stories. All had been brutally raped. Many had watched their husbands murdered and their daughters raped. Some were hospitalized for months because of rape-inflicted wounds. Others had been impregnated by their rapists. Some had begged God to let them die.

Perhaps worst of all, in a distorted patriarchal culture that offers impunity to rapists and blames victims, some of the women we met had been rejected by their families. Physically scarred, emotionally wounded and finally abandoned, these women had lost all hope. But local church counselors, trained and mobilized by World Relief, embraced these women with tangible love in the form of medical, psychosocial and economic support. Through counseling and income-generating projects, offered in the context of ongoing relationships, the women we met had been reintegrated as vital members of their communities. Committed to changing the culture of impunity surrounding rape, World Relief also works closely with schools, government representatives, traditional leaders and military leaders to raise awareness and change cultural attitudes towards women.

What about Cecile? Sadly, when her husband discovered she’d been raped he rejected her and left her at her parents’ house. Fortunately, her parents contacted the counselors trained by World Relief, who helped Cecile get the medical and emotional care she needed. They also initiated contact with her husband, Jean. After repeated conversations with the counselors, Jean’s heart was completely changed. Not only did he humbly welcome Cecile back home, but he also offered financial assistance to other rape victims being cared for by the counselors.

I don’t have words to describe my outrage at the horror of rape as a weapon of war. But that outrage propelled me action: to learn, to pray, to speak up and to give. Would you join me in being outraged and in taking action? Together, World Relief and One Days Wages are turning stories of inconceivable suffering into stories of hope. On behalf of the women of Congo, I ask you to give generously today!

When you give now, you’re supporting women in DR Congo affected by gender-based violence. Your gift will be used to provide medical care and trauma counseling for the victims of sexual violence and to raise community awareness about violence against women. All donations will be matched by One Day’s Wages.

Lynne Hybels is the co-founder of Willow Creek Community Church in Illinois. In the Democratic Republic of Congo, where the deadliest conflict since WWII still rages, she has partnered with local churches that are caring for women who have been brutally raped, and are initiating grassroots peacemaking efforts in their villages.