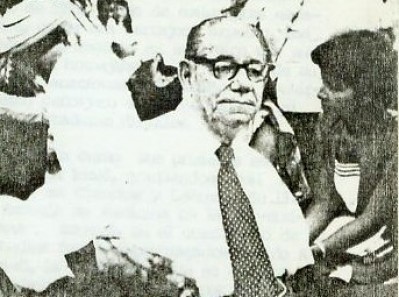 There is a name that should never be forgotten in the history of the Miami Office of World Relief: Manuel B. Salabarria.  He was God’s man for the time.  On May 5th 1980, I was asked to open the Miami Office of World Relief to respond to the flood of “Cuban Entrants” who were pouring into South Florida (128,000+). I had the advantage of having grown up in Cuba and lived for two years under the Castro Revolution. Within a month, Miami provided a “one-stop-center” for all of the voluntary agencies to continue the resettlement process in the vacant civic center.

It was during this time that Rev. Manuel Salabarria came to me and offered his services. Pastor Salabarria had a vast experience of doing social work. In the first years of the Revolution (before it declared itself Marxist-Leninists), he had been in charge of the largest government run reformatory in Cuba. After leaving Cuba (with false papers because of his position with the government), he worked as a pastor in Puerto Rico from 1962 until 1970 when he moved to Miami. At first, he had a difficult time making a living, to the point that he was repairing cars under the trees in his yard.

He would take his tithe and convert it to “dimes” (the cost of a phone-call at the time) and go to the airport when the flights from Cuba would arrive.  He would meet the people coming off the planes and say: “Do you need a dime to make a call? My name is Rev. Salabarria, I give you this dime in the name of Jesus Christ.”

His wisdom and experience during the first years of the operation of the World Relief Miami were priceless.  It seemed that, backed by a “quick prayer” (often I would say: “Pastor, please lower your voice, you are in a government office.”), Pastor Salabarria would come up with a solution for every problem case.

Pastor Salabarria could spot them as they would walk in the door. Many were “his boys” who he had worked with in the government orphanage who had gone into a life of crime and drugs. Pastor knew how to handle them. For most of these, there was no money left in their accounts to help them and no “back-up” funds.

Having been a pastor of a denomination in Cuba, Salabarria had led churches in many of the cities.  He would ask the “refugee” what municipality he was from in Cuba and then call the “municipality in exile” and say, “ I have one of your stray children who needs help for a job (or a place to live or money for rent)”. He usually got the needed assistance.

During the early years that Pastor Salabarria worked with World Relief Miami, he was diagnosed with lung cancer. His cancer was of the type that had few symptoms until the final stages. So it was that Manuel Salabarria worked as a volunteer for the last five years of his life knowing that he had a fatal disease.

Unfortunately, during the last months of Pastor Salabarria’s life, when the cancer took over, I was both the Director of the Miami office and the Latin American/Caribbean Regional Director, spending only one or two days per week in Miami. So it was that, much to my regret, when Manuel B. Salabarria went to meet his Lord and Master, who he had served so faithfully for so many years, I was out of town and missed his funeral.

Between 1980 and 1981, Pastor Salabarria was able to find employment for 750 of “his boys” in the Miami area.  Few employers would turn him down when he called asking for a job for someone.

I never forgot a rather frustrated Cuban businessman telling me over the phone: “I can’t say no to this old man, he gave me my first dime when I landed in this country.”

In those first two years, World Relief Miami resettled over 6,500 “Cuban Entrants.” God has prepared some very special servants that have worked with World Relief throughout the years, but one of the most special was Pastor Manuel B Salabarria!