Standing in the Gap

In Ezekiel 22:30, the prophet says on behalf of God, “I looked for anyone to repair the wall and stand in the gap for me on behalf of the land, so I wouldn’t have to destroy it. But I couldn’t find anyone.”

In the ancient world of the Bible, cities had walls surrounding them to provide protection from enemies. When the wall was breached, the city was vulnerable to destruction; the only way to secure it was for people to risk their lives by literally standing in the gap in the wall and fighting the enemy.

I remember the first time I heard the term “stand in the gap” because I had no idea how I could do that for anyone, especially immigrants. My own immigration story had been simple and resolved easily when I was in elementary school. It had left me ignorant of the plight of many immigrants to the U.S. I distinctly remember the pleasure of flying into the Los Angeles Airport with a tourist visa and landing to the welcome of family, including an uncle who had become a U.S. citizen and already filed for an immigrant visa for his brother, my dad. My uncle, unknowingly, had stood in the gap for us.

More recently, I’ve been reflecting on this idea. If there’s a biblical model for standing in the gap for vulnerable people, how do I stand in the gap for my immigrant neighbors?

At least part of the answer came to me incidentally through my work at World Relief, which has brought the brutal realities of our immigration system into my life. Stories I would rather not know. Stories most people don’t want to know either.

It’s difficult to hear these stories, but I’ve come to realize that part of standing in the gap is bringing the whole, ugly and ruthless world into our lives, into our understanding of family and love of neighbor. Our willingness to listen to and enter into these stories allows us to share in the suffering of our neighbors and stand in the gap in prayer and advocacy. It’s far more difficult to stand in the gap for statistics and economic rhetoric around a political issue, but put a human face and a story on that same issue and everything changes.

A friend once told me that she couldn’t do my job—she couldn’t listen day after day to the tragedy and suffering that is often part of the immigrant experience because she would want to take every person home with her.

I do take every person home with me, but not in the way she meant. I carry those stories with me everywhere. They inform the way I vote; how I see other immigrants; the way I speak about them to other people; and how I advocate for them. I have seared them into my consciousness. And I know I’m not complicit in their suffering and terror. Instead, their stories keep me hungering and thirsting for righteousness, as Jesus says in the Sermon on the Mount (Mt. 5:6).

They make me long to see justice and compassion in our immigration system, despite the fact that all efforts at reform of that outdated system have failed in recent years.

And yet I have hope. Because Jesus promises that those who hunger and thirst for righteousness will be filled. My prayers and advocacy for immigrants are fueled by that promise. 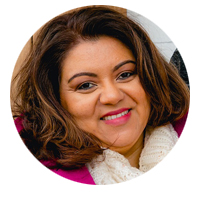 Karen González has worked at World Relief’s headquarters in Baltimore since 2015. She is an HR professional, an immigrant advocate, and a writer, who emigrated from Guatemala to the U.S. as a child. Karen has a graduate degree from Fuller Theological Seminary, where she studied theology and missiology. Her first book, releasing in May 2019, is about her own immigration story weaved with theological reflections on the many immigrants found in the Bible.