Toward a Vision for Gender Equality in Kajiado, Kenya

At the southern edge of the former Rift Valley province, just south of the Kenyan capital of Nairobi, lies Kajiado, a mountainous region with vast valleys of open space where zebra, giraffe and wildebeest roam. Spread throughout the diverse countryside are communities of the Maasai people — a people known for their brightly colored clothing and the multi-colored, beaded jewelry they wear around their necks and arms. Although they’re widely celebrated for honoring and maintaining their way of life, the Maasai people aren’t without challenges.

World Relief began working in Kajiado in 2018, and it wasn’t long before we came to understand the hard truths of life for people living in this community. 57% of children are under-vaccinated against common yet life-threatening diseases. 10% of children under the age of five are malnourished. 44% of all households are food insecure, meaning that they either do not have enough food or enough money to buy food in the next week. And the rates of preventable diseases are very high due to unclean drinking water and poor hygiene practices.

These numbers alone are difficult to comprehend. And yet, the situation in Kajiado is even more dire for girls and women. Harmful cultural beliefs and traditional practices strip opportunity from thousands of young girls and women and prevent them from achieving their God-given potential, condemning them to a life that is anything but equal.

Among the Maasai tribespeople living in Kajiado today, 78% of all girls undergo female genital mutilation (FGM) — a harmful practice that involves either the partial or total removal of external female genitalia, or other injury to the female genital organs, for non-medical reasons. FGM typically takes place between infancy and the age of 15 and can result in serious, life-long health consequences such as severe bleeding, life-threatening infection, complications in childbirth and increased risk of newborn deaths.

Today, more than 200 million women and girls living around the world have undergone this brutal practice, and the WHO now classifies FGM as a human rights violation.

FGM, however, is just one way gender injustice manifests itself in Kajiado. Only 10% of young girls attend secondary school due to early teenage marriage and/or unexpected pregnancies. In a community that values men as warriors and chiefs, girls and women are given little to no opportunity to break out of the age-old mold and shape their own futures.

And yet, change is beginning to take root.

With the help of 184 local church partners, World Relief is changing hearts and minds through Bible study, behavior-change workshops and vision casting seminars. Implemented through local churches, these programs teach basic biblical definitions of marriage, friendship and equality. Little by little, men and women of God are embracing the concept of Imago Dei and are beginning to speak out against harmful cultural beliefs — in particular, those that harm or marginalize young girls and women.

Take Josephine, for example, a brave woman of about twenty-five years of age and a mother to five children. Her husband is all but non-existent in her life, except when he has material needs. Every few years, he pops back into Josephine’s life, robs her of the food and material goods that sustain her family, and spends her money on alcohol before leaving again.

In Maasai culture, a woman cannot leave her husband even in the most challenging and unfair of circumstances. Therefore, Josephine is forced to stay in this harmful marriage. And yet, there’s hope.

Josephine is surrounded by a band of women from her church, one which partners with World Relief, who have come alongside her to pray with her. They share food and clothing with her during the harder times, and they check in on her to see how she is doing. Josephine is now one of the few in her community to speak out against domestic violence and inequality in the marriage relationship, which is a little talked about issue despite the high number of marriages facing similar challenges.

And then there’s Beatrice, a woman who is speaking out strongly against the traditional role Maasai women are expected to play – a role that burdens Beatrice daily. Often rising at four o’clock in the morning, she spends her days preparing and cooking food for her family, fetching water that’s a two-hour walk away, raising her children, finding ways to cover school fees, caring for livestock, and building and maintaining her house. Most days, Beatrice doesn’t make it to bed until 11 o’clock at night, only to rise again at 4 am the following day.

Now, Beatrice is raising her voice against this kind of inequality. She’s also speaking out strongly against female genital mutilation, which she herself experienced as a young girl.

Remarkably, not all advocates for gender equality are women. Sabore is one of the last laibons in his community – the highest of chiefs in a Maasai tribe and a role that passes on from father to son. A Laibon acts as a ritual leader and has authority over all political and military decisions. Yet Sabore’s testimony is about more than just his generational status. It’s of his status as a follower of Christ. He now speaks out about a hope that far outshines his role and has become a prominent church leader in the community, advocating for the most vulnerable, including many of the young women in his community.

There is still much work to be done in the Maasai community of Kajiado, but we are seeing change take root, and we are committed to continuing the journey toward a gender-equal world, wherever it takes us. Thank you for being #EachForEqual alongside us. 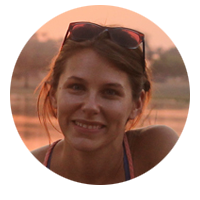 Amanda Patterson serves as World Relief’s Humanitarian and Disaster Response Unit Program Officer in DR Congo and South Sudan. Prior to joining World Relief, Amanda worked overseas as a humanitarian responder to refugee and conflict emergencies in Niger, South Sudan, Greece, and Ethiopia with a large Christian NGO. She is passionate about helping others experience the beauty and diversity of God’s creation through art, nature and cultural engagement.