Why Waging Peace is Necessary in the DR Congo

By Jenny Yang
Kasolene is a beautiful, loving mother of four children in eastern DR Congo. She’s been a survivor of sexual violence – twice. She said, “When my husband and I were raising our third child, I was raped. After the rape, he has directly forsaken me telling me that he cannot live with a raped woman for fear of being despised and rejected by the community.”

Kasolene became pregnant with her fourth child as a result of the rape, and her husband abandoned her. Left with the responsibility to provide for her children, Kasolene was forced to work in the fields, where a soldier then raped her for the second time. 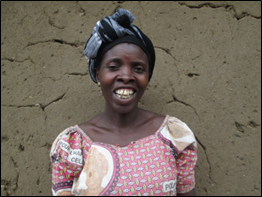 Kasolene, a woman from DR Congo

Kasolene’s story should be unique – but it’s not. Some experts consider the DR Congo to be among the world’s worst places for women to live.Engaged in a cycle of conflict and violence which has cost more than 5 million lives, rape is regularly used as a weapon of war. At one time, 48 women were raped in the DR Congo every hour.

War has become more profitable than peace in the DR Congo, and the efforts of the international community to combat such violence have made little progress. They’ve often focused on addressing the consequences of the conflict, not the causes of the conflict. Top-down diplomacy is needed, but such efforts will not be successful without grassroots peace building activities where grievances between individuals are addressed to ensure they will not escalate into a greater conflict.

As is often the plight for women in DR Congo who survive sexual violence, Kasolene was abandoned. Fortunately, she met counselors who’d been trained by World Relief in trauma counseling. They voluntarily took her to the hospital to ensure that she received the medical care she needed.

Kasolene is now raising beans and is dreaming of starting a business in pig-breeding in order to build a small house and to get all of her children through school without difficulties. She said, “Today I feel better with meetings of the club formed by World Relief and with sharing of the word of God, and with the comfort and support they give us.”

Trained and empowered local counselors and peace makers are making a real difference to resolve conflict to reduce the stigma against those who have suffered gender-based violence and also to heal and build up entire communities. Join us in empowering peace makers in the DR Congo while raising your voice to Wage Peace and ask our elected officials support peace in the DR Congo.

You can join us by giving today to support women in DR Congo affected by gender-based violence.  All donations will be matched by One Day’s Wages. Your gift will be used to provide medical care and trauma counseling for the victims of sexual violence and to raise community awareness about violence against women.

Jenny Yang is vice president of advocacy and policy at World Relief and the co-author of Welcoming the Stranger.