Kandal Province, Cambodia: A sea of matching white hats filled the tent in Kohtaom District early this morning. More than 200 secondary school students dominated the crowd, and were joined by government officials, religious leaders, police, medical personnel and NGO representatives. They had gathered together to demonstrate the same message printed clearly on their red-ribbon t-shirts: “We are united to protect ourselves from AIDS.”
Similar ceremonies are taking place across the globe this World AIDS Day. And there is much to celebrate. The combined response in the past decade by governments, donors, local organizations, international NGOs, and countless volunteers has resulted in new HIV infections falling, AIDS-related deaths decreasing, and treatment being made accessible to millions more individuals, particularly those in low- and middle-income countries. 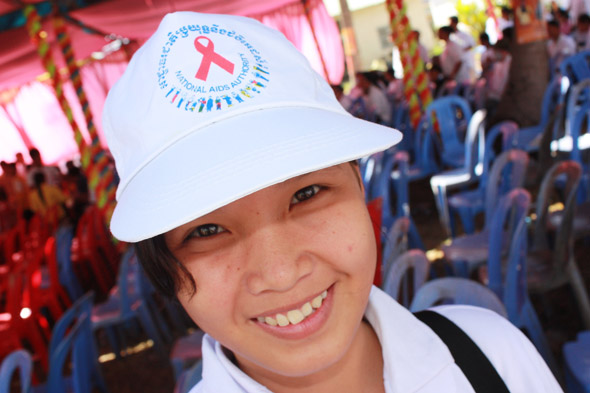 Here in Cambodia, participants reflected on the country’s astounding accomplishments in addressing the epidemic. Thanks to prevention efforts over the last nine years, adult HIV prevalence rate has been reduced from 1.2% to 0.5%. Cambodia is also one of the few countries in the world that provides antiretroviral therapy to more than 80 percent of those eligible for it.

The presence at today’s event of more than 100 HIV-positive individuals, however, was a stark reminder that the fight is not over and that resources and responses cannot waver. There are more than 75,000 people living with HIV in Cambodia, and they remain vulnerable. A recent national report found that HIV-affected households experienced lower income and increased medical expenses, which negatively impacted their financial stability, food security and psychosocial wellbeing, as well as the status of women and education of children.

More than 30 million people have died worldwide from AIDS-related causes since the epidemic began. And this does not begin to account for the untold toll on families, communities, and countries as a whole.

Yet despite so much unnecessary loss in the world, or perhaps to honor it, the overarching theme of today’s event was hope. 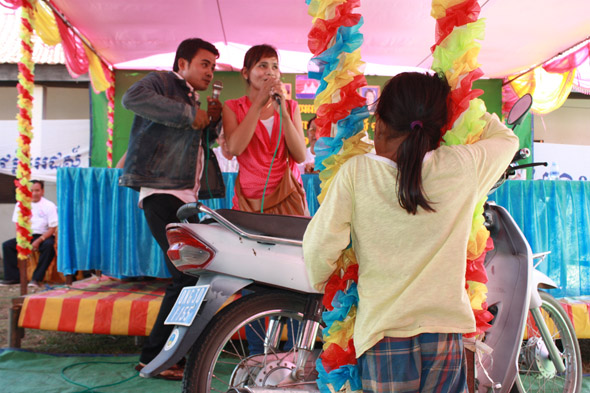 The students, aged 15-18 years, sat attentively as World Relief staff presented a drama on the pressures of teenage life. The skit’s message was simple—to value life and make healthy choices about sex—but the issues it raised are relevant to these teens and complex to address: poverty, drug use, migration, “sugar daddies,” unplanned pregnancies and suicide.

World Relief meets with more than 7,000 youth throughout Cambodia on a weekly basis to discuss these issues. In Kohtaom District alone, World Relief works in 42 villages. Youth are provided a safe space to ask questions as they build life skills and learn about disease prevention, nutrition, and trafficking prevention. Evaluations have found that the program helps youth to increase their knowledge about AIDS, promote HIV testing, share health messages with friends, improve school attendance, avoid drug and alcohol abuse, and mentor orphans in their community. 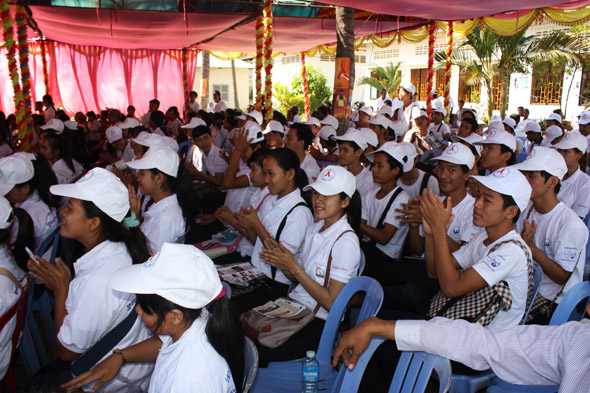 At the AIDS Day event students were randomly chosen and asked questions by the district officer to test their AIDS knowledge. Despite giggles from their friends when selected, each would walk confidently to the front and respond correctly to questions like, “What should people living with AIDS do to take care of themselves?”, “Can people who look healthy be infected by HIV?”, and “What should you do if your relative or friend finds out they are HIV positive?”

This is a generation for whom AIDS is a reality. They have never known the world without it. But they are informed, they are supported, and they are capable of making choices that protect their future. AIDS may be the currently reality, but with continued investments in the response, this generation can be the one to lead the charge on making it a thing of the past.

Imagine what an AIDS Day celebration we will then have.