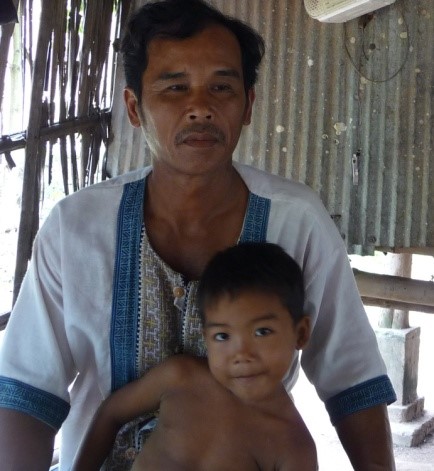 Veng Bun is a church leader, father, farmer – and a hero. He lives just outside the bustling city of Phnom Penh, a source and destination city for trafficked men, women and children in Cambodia. People of all ages are bought and sold in this city, then exploited for sex, labor and domestic work. In the past, Veng was also at risk of being sold into slavery. He wasn’t aware that traffickers preyed on migrant workers like himself.

Veng grows crops on a small plot of land outside his house, but that hasn’t always provided enough income to support his four children. To make up the difference, he often traveled for jobs as a construction worker or wood-cutter. On these routes, workers become vulnerable to traffickers. This is how many become enslaved for years, working without wages or a chance to go home.

Then, two years ago, Veng attended a trafficking prevention program hosted by World Relief. There, he realized his community’s vulnerability, as well as his own. As he learned about the tactics of traffickers, Veng knew he couldn’t keep this life-saving information to himself. Since he was a church leader, he was perfectly positioned to protect his village. Then World Relief staff equipped him with the tools he needed to educate his neighbors about the risk factors for human trafficking and ways they could prevent it together.

Since then, he’s watched his community grow in trafficking awareness. By shedding light on an injustice that is shrouded in secrecy and conducted under the cover of darkness, Veng is leading a movement that spreads from his church into the greater community. Now, his church and village stand together as a united force against human trafficking. This is what makes Veng a hero.

You can stand with church leaders like Veng as they empower others to confront the deep injustices impacting the most vulnerable. Join the movement today at EmpowerAHero.org!

Keep watch over yourselves and all the flock of which the Holy Spirit has made you overseers. Be shepherds of the church of God, which he bought with his own blood.