Thank God for Women — A Conversation with Courtney O’Connell 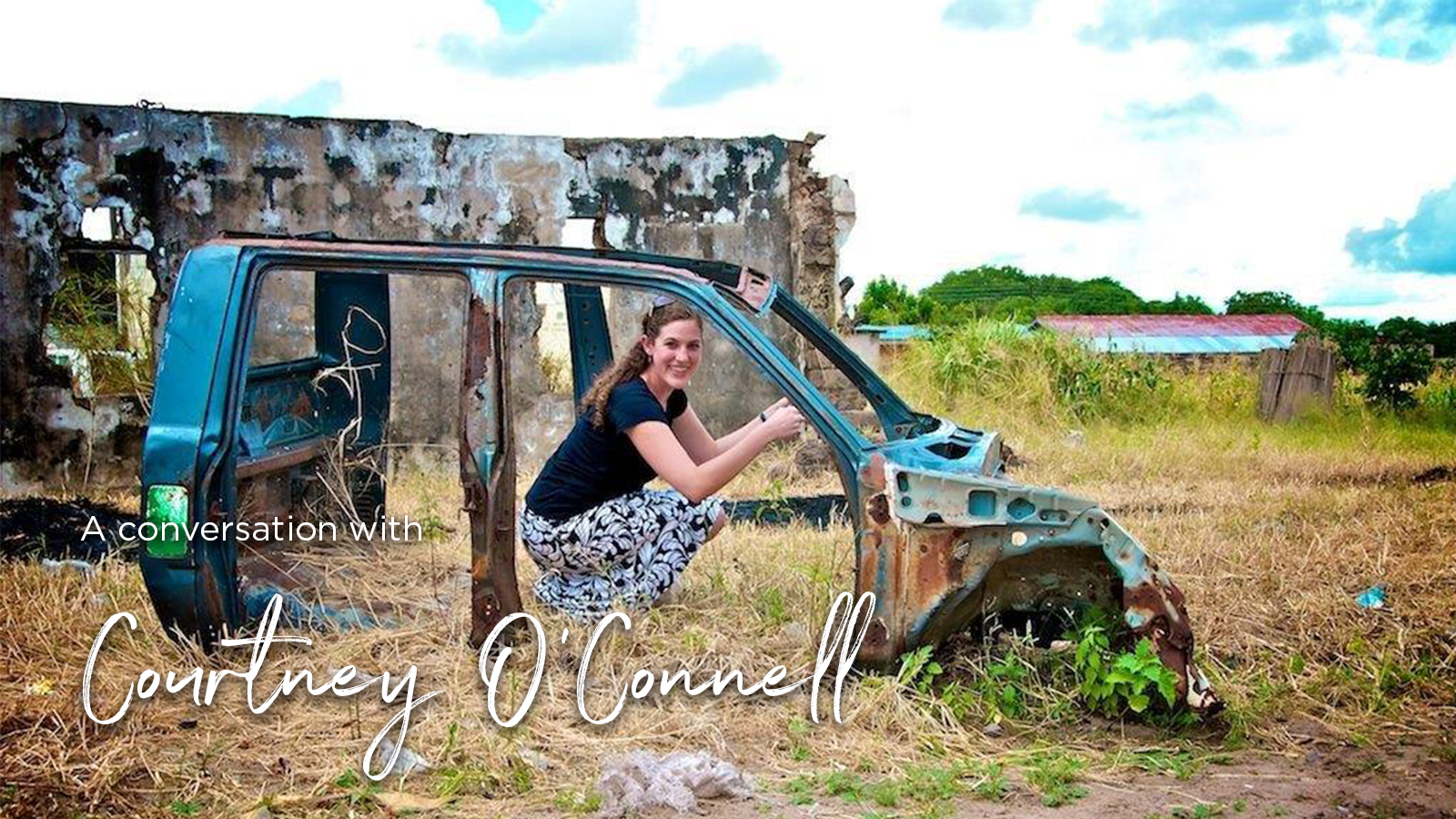 Thank God for Women is a blog series rooted in gratitude for the strength, courage, and incredible capacity women demonstrate.

After living and working in South Africa and Zambia, Courtney O’Connell came to World Relief in 2011. With a master’s degree in International Development from Eastern University, Courtney took on the role of Savings for Life (SFL) Senior Program Advisor, supporting program staff in the nine countries where World Relief implements SFL. She loves living in Rwanda, close to where Savings for Life is being implemented, and when she’s not working, Courtney can be found running and biking throughout Rwanda’s beautiful countryside. Recently, Cassidy Stratton, World Relief’s Marketing Coordinator, had an opportunity to catch up with Courtney to hear how she’s seen World Relief’s Savings for Life program empower women around the world:

Cassidy Stratton: You noted that you had already lived in Africa for 3 years. How did you specifically get connected to World Relief?

Courtney O’Connell: When I was job searching, I knew I wanted to do economic development in Africa with a Christian organization, and so I just went to some of the big names that I could immediately think of. World Relief actually had my current position posted, so without even thinking, or even proofreading, I submitted my resume. And, by the grace of God, I got it.

In my previous work overseas, I had seen organizations that claimed to be Christian on the website, and when I went to the field to see their programs, there was actually nothing Christian about them. And I was not sure if World Relief was like that since I had not seen them overseas. So I reached out to a professor of mine who was writing a book for which Stephen Bauman, the president of World Relief at that time, was submitting a chapter. She forwarded me Stephen’s chapter, which was all about working with the church and the heart and soul of what World Relief is about. As I read it, I said “Man, that sounds really good! And if they are who they say they are then I would totally be in..”

As I left the U.S., I thought, “I’m not selling my car until they prove that they are who they say they are.” Not that my car was nice; it was my Grandma’s hand-me-down Buick. Well, I moved to Rwanda in July of 2011. And I immediately, I fell in love with the way we do our work. Everything Stephen wrote about was true. There truly is a partnership with the local church, and the desire is to see the local church shine, not the organization. And to really infuse and integrate biblical beliefs into programs. To me, that was so unique. I was, and still am, thrilled to be a part of an organization that cares for the vulnerable in the way we do.

CS: Can you tell me more about your current position?

CO: I am the Savings for Life Senior Program Advisor—a program that forms community-based savings groups, where people pool their own money together in order to give loans to each other, charging interest. And after a set period of time—approximately 9 – 12 months—everyone takes back the savings they had put in, plus the portion of interest that they earned. So then it’s a very useful amount of money that a family can use to pay for school fees, invest in their farm, start a business, repair their house and the like. The best thing is that it is all their own money. It’s not like a loan from a bank. And when they go home at the end of this cycle for savings, they have in their hands probably the most amount of money that they’ve ever had at one time. It’s such an empowering program, and it’s great to be a part of it.

World Relief is running this program in 10 countries, and my role is to work alongside the program managers and field staff that are actually running the program. My role is to support them, help set strategies, prepare proposals, and make sure they have all of the tools to run a successful program. It’s cool for me because I get to be pretty close to the action, and I get to walk alongside the staff, the real heroes who are doing the work. Sometimes I feel like a cheerleader, cheering the programs along and helping teams to see what’s possible.

CS: What role have you seen women play in the Savings for Life Program?

CO: In most of the context where we’re working, the women are the glue of the society. They are the strong one’s in the family who make things happen. Unfortunately in most of Sub-Saharan Africa, the traditional gender roles are that the men are the ones who make all of the important household financial decisions and are the controllers of the money. The women are the ones who are tasked to provide for the family on a daily basis, yet they don’t have a lot of authority or even their own money to make things happen.

We hear a lot of testimonies from women saying that it’s embarrassing because they have to go and—they use the word “beg”—their husband in order to get money to buy salt, buy oil, etc. in order to prepare food. If she can’t prepare food then she is not doing her gender role. But in order to do her role within the family, she actually has to ask her husband for help. So it’s this huge power dynamic struggle.

The Savings for Life program worldwide is 80% women. And we see that women are the ones that benefit from this. They say now they do not have to beg their husbands because they can provide for themselves. They have this glow about them—this empowerment, this hope—because they feel like they are now doing the role that they are designed to do. Not only that, but they are also starting new businesses and paying school fees for their children, all things that had only been a dream before.

CS: Can you recall a specific success story of a Savings for Life group?

CO: I remember visiting a savings group at the beginning of their savings cycle, and they said to me, “We’re just poor people and can’t save, so can you give us money?” And then I actually went to visit that same group 9 months later when they were having the day of distribution. They literally had a table mounted with money. You could just see the joy, the hope, the empowerment, the confidence beaming out of them. And they were able to say, “This is our money, and no one helped us do this.” To me, this is what we’re here for. That’s the success. When people say that we can set our own goals and no one else has to do it for us.

CS: Is there a specific woman that has impacted your work?

CO: Another story I want to tell you about is about a woman named Adele. She lives in Burundi, one of the poorest countries where we work. It’s a beautiful country and has a lot of resources, but it also has a lot of poverty and corruption. Adele lives way out in the middle of a village, and Savings for Life comes that way, and she decides that she is going to join. During her first cycle of savings, she was able to buy a goat. This was the very first goat that her family owned. A goat out in the village is first a huge status and second a long-term savings. She was so happy to buy this goat. And by the second cycle of the savings program, she was able to buy a cow. Her family was able to use this cow to plow their fields. The savings group was impacting multiple areas of her life.

A few years after she joined the savings group, the community staff member approached her and asked if she could be a volunteer for Savings for Life, and she accepted. She got trained on how to be a volunteer village agent, and then she went out and started other training groups. Now she’s working in her own community and neighboring communities, helping to teach other people about this program that has been so impacting for her.

CS: How have you seen the savings groups also serve as support groups?

CO: The social aspect of the groups really help. There was a woman in a savings group that became a widow. She ended up moving back to her family, but she had a lot of relational problems and it wasn’t healthy for her stay in the household that she grew up in. And so her savings group actually built her a house. It was their own initiative. World Relief was not part of it at all. It was that this group of women cared for each other so much that they saw their sister in need and did something about it.

To me that is just really powerful how the social aspect of the savings group helps the women walk alongside each other to achieve their goals financially. And to just have social capital and strength. It helps relationships go way deeper.

CS: Have there been any women in your life that have influenced your work and the way you engage with women around the world?

CO: The small group that I’m a part of. There are women here in Rwanda that we meet on a weekly basis to walk through life together. There are challenges of living abroad, and being away from your home culture, and sometimes there are just frustration of life, and to be with other people who you know want the best for you and care about you and ask how they can help you. I have been impacted by that and have found a lot of solidarity and strength from these women.

I liken that to the solidarity and strength other women can get from their Savings for Life group.

CS: Why do you Thank God for Women?

And I think the real strength in rural communities, especially in Sub-Saharan Africa, are the women who are holding everything together, making changes for their families and their kids. I think women are the changemakers in our world.

Give today to create a better world for women.