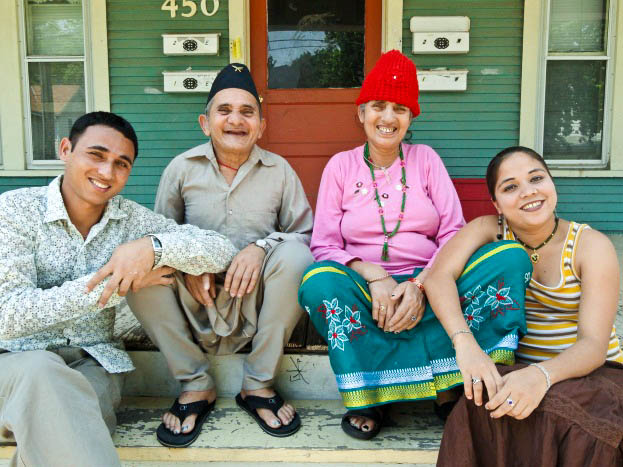 Any refugee entering the United States faces significant obstacles. But for Nar and Dhan Maya Ghorsai, a Bhutanese couple resettled in Aurora, silence proved to be the greatest: deaf for most of their lives, Nar and Dhan were unable to learn English, form deep relationships or pursue success in their new community. However, on June 15, 2012, their silence was broken with the gift of hearing aids. Nar and Dhan were able to speak, listen and interact with a world that had been “dull” for years prior, the couple says.

World Relief Medical Case Specialist Esther Myahla explains that deafness is a common phenomenon among the Bhutanese community. Many enter the United States with limited hearing ability, but few doctors have been able to distinguish the root cause. Of Nar, Myahla explains, “He woke up one day as a child and could no longer hear.” For years, the couple was without answers and opportunities, and like many Bhutanese, simply accepted their hearing loss and the resulting limitations.

This all changed when the family was introduced to World Relief. Through the Intensive Medical Case Management program the Ghorsai family was connected with Esther, who acted as their spokesperson, advocate and companion. The Ghorsais were given the opportunity to visit a hearing specialist who outfitted them with custom hearing aids. Since then, the family has expressed how “very happy” and excited they are to be able to hear clearly all of the sounds that they had lost.

Without the ability to hear or speak, the Ghorsais often found themselves sitting idly at home without much drive or hope. Now, they are eager to build relationships, visiting neighbors and relatives regularly. Both Nar and Dhan anticipate returning to World Relief’s English as a Second Language (ESL) classes so they can finally learn the English language, a task previously impossible as they both struggled to read lips. Nar explains, “The ear computers have given me a new life. It is like I am born again.”

Their son, Dal Ghorsai, beams with joy when describing the family’s newfound freedom. Dal says with a smile on his face: “I feel so glad that I could not express it. Since they were children, they were deaf and handicapped. But, now they can do everything. Now, they can have normal lives. I want to give thanks to World Relief and specifically to Esther because she suffered a lot for them.”

When their newfound ability to hear and speak, the Ghorsais have no doubt that they will more easily be able to communicate with the outside world, and experience an easier assimilation into American culture. Their past was marked by limited comprehension, relationships, and potential for success; the future however, is filled with hopeful ambition.