Immigrants are transforming the Church in the United States.

In fact, immigrant congregations are growing faster than any other segment of evangelical churches.

ILS also supports its field offices and works with these experienced direct provider offices to engage the local church and provide guidance and technical support to those interested in offering their own immigration legal clinics as an embodiment of Christ's Gospel of word and deed.

World Relief Immigration Legal Services Technical Unit is pleased to offer intensive, 40 hour immigration law trainings. The trainings are conducted using the curriculum of the Immigrant Legal Resource Center (ILRC). This course will help to provide the necessary training component for individuals who wish to apply for accreditation from the Department of Justice (DOJ). DOJ recognition and accreditation allows non-attorneys working in DOJ recognized non-profit organizations to practice immigration law. The course will touch on all areas of immigration law and practice focusing on topics most relevant to those serving and representing low-income immigrants.

Due to the requirements of the accreditation application process, we recommend that only individuals with U.S. citizenship, lawful permanent residence, or other long-term immigration status apply for this training.

Additional requirements for applying for Department of Justice (DOJ) recognition and accreditation will be discussed during the training week. Participants who pass the take-home test will receive a certificate of completion from the Immigrant Legal Resource Center (ILRC), the authors of the training curriculum. This will help participants in the process of obtaining DOJ accreditation. 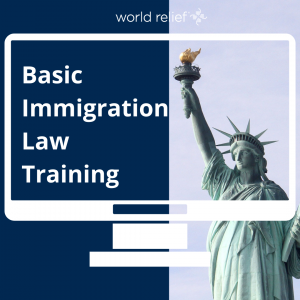 World Relief is pleased to offer a Virtual Basic Immigration Law Training in 2022 using the curriculum of the Immigrant Legal Resource Center (ILRC). The training will be held January 10 - February 18, 2022.

If you have any questions regarding registration for this training, please contact immigration@wr.org

World Relief hosts trainings throughout the year.  If you are interested in Basic Immigration Law training, please contact immigration@wr.org for the latest training calendar.

Hannah Vickner Hough, Esq., Director
Hannah Vickner Hough is an immigration attorney and the Director of National Immigration Programs for World Relief. She has represented non-citizen neighbors in removal and appeals, asylum, and complex immigration matters. She has worked on projects focused on disability access for immigrants in the immigration system and anti-human trafficking projects. In her role, she supports both the World Relief Immigration Service network and church-based network to provided competent and high-quality legal services to their immigrant community members and support system changes toward justice for immigrant communities through legal advocacy.

Sarah Bankard, Capacity Building Manager
Sarah is the Capacity Building Specialist of World Relief’s Immigration Legal Services Tech Unit. She works with World Relief’s field offices and church sites on applications and issues pertaining to the Department of Justice Recognition and Accreditation Program. She received her Bachelor of Arts degree in English and Spanish from McDaniel College in 2013. After graduating from college, Sarah completed an InterVarsity Urban Program in Alexandria, VA where she lived and worked with the local immigrant population while studying God’s heart for justice in Washington, DC. Sarah joined World Relief in 2014 as an intern for the Vice President of Advocacy and she joined the ILS Technical Unit in 2015.

Jeanne Funk, Esq., Legal Training and Technical Assistance Manager
Jeanne has practiced family-based immigration since 2002. Prior to joining World Relief, Jeanne represented clients in family-based immigration cases, naturalization and humanitarian relief including VAWA and U Visas as a solo practitioner. She has also worked with NH Catholic Charities and the International Institute of NH as a VAWA/U-Visa attorney. She has been an invited trainer regionally and nationally including for AILA’s National Conference, the Federal Bar Association’s Immigration Conference, and CLINIC trainings. Jeanne received her B.A. from Villanova University and her J.D. from Northeastern University. She has served on the NH Human Trafficking Collaborative Task Force, the Greater Manchester Committee Against Domestic Violence, and the NH Attorney General’s subcommittee on Immigrants and Domestic Violence.

Didn't find what you're looking for? Get in touch!